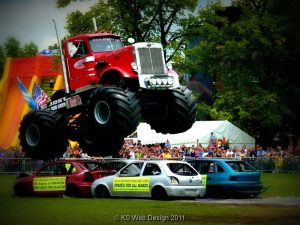 On Sunday the 10th July we went to the annual Wolverhampton Town show, This event is on every year this years was on the Saturday 9th & Sunday 10th July. I have been to the show before and is a good day out. The only thing that I would say is parking is a problem as there are not that many spaces around West Park, there is space to park on the roads that circle the park, but can prove difficult to get a space, there are disabled spaces within the park from the several entrances around West Park.

The event is free to get in, on the Sunday we went there were several main events going on within the main arena there was: Gerard Naprous & the Devil’s Horsemen, Bob Hogg & this sheepdog, The Royal Artillery Motorcycle Display Team (The Flying Gunners), Big Pete & Grim Reaper Monster trucks, James Dylan’s Stunt World, The Royal Artillery Parachute Display Team (The Black Knights).

We watched a few of the events within the main arena, we watched Royal artillery motorbike display team, the riders were great with good stunts on both motor bikes as well as quad bikes. After the display you could chat to the riders and the kids could sit on the both the motor bikes and qwuad bike. The main part I wanted to see was the monster trucks, as I love watching these as theses trucks were at this show in previous years and also the Walsall Town show that we went to. The trucks went around the arena a few times then went over some cars a few times including getting in the air above the cars, also they ripped a car apart.

Around the park was loads of other things going on , there were different marquee’s with all different activities and stalls with all sorts of information from health issues to fun things to do with the kids. There was another part of the show, that was split into three different arenas with cycles, kids could try all different types of bike from the very unusual, to mountain bikes over different courses.

There was so much going on over the weekend of the Wolverhampton show, we got round most of it on the Sunday we got there about 11am and left just before 5pm, it was a great day and the kids did really enjoy the day out as the weather was great aswell, we will go again next year, and if you are in the area when it its on this annual event is well worth a visit. See some of the photos of our day out below, click on the thumbnail images to see the larger photo.