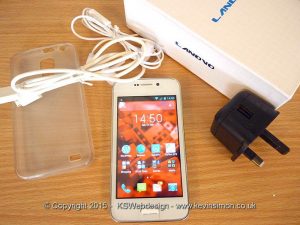 This is a quick review on the landvo L100 android 4″ mobile phone, I have just had one as my main phone see bottom of review why I went for this cheap fone instead of a top of the range phone. This review is based on the Landvo L100 phone these are a cheap Chinese makes that you see on eBay or Amazon for around £50 though there are other makes of Chinese import phones at around the same price and are nearly all the same spec, other makes include Mysaga C3, Jiake mini, Cubot GT72 / GT95, Swees, BML, iNew U1.

On first opening the box I was impressed as knowing would be a cheap phones because of the price but was nicely surprise how well the presentation was, the phone came with a p reinstalled screen protector that that you remove the top layer and a little silicone protective bumper case. Now yes the phone is very plasticey but with the silver down the centre it does look good, you can see they have ripped off Samsung with the styling as really does look like a Galaxy phone, the device is pretty light even with the battery.

Once switched on the screen even though a low resolution by modern standards at 800 x 480, is very bright and clear, speed wise flicking through screens etc was pretty quick with no real lag, I ran antutu benchmark test an this came out around 10500, which for the price of these phones isn’t that bad really. I have installed few games and again no real problem, but being only dual core and with 512mb ram won’t be any good for modern 3d games.

I had a little problem when setting up with my TalkTalk mobile contract sim in that TalkTalk use the Vodafone network which it connected to ok, but couldn’t connect to the mobile 2g or 3g internet, I just had to setup an new VPN with TalkTalk proxy server which wasn’t really a problem but if anyone looking at these kind of Chinese phones may need to contact their service provider to help with this, though would only take a minute or two. I also has a problem with the GPS in that the phone couldn’t get a GPS fix, which is not good for me in that I use a full purchased GPS app called co-pilot, all it was though is the phone has GPS EPO assistance, this is a service by MediaTek that downloads files with locations of the satellites to speed up location fix. Though for some reason couldn’t download files saying “update EPO files failed” , so I had to disable that and then got GPS fix straight away.

The camera on the phone isn’t great but does suffice for shots to put on the Web like facebook, snapchat, Instagram etc, having the camera interpolated to the higher resolution don’t seem to make any difference in the clarity of the photo. It does have a flash though this isn’t that bright it is great for a torch but that’s about it. The speaker is OK for listening to music, not greatly loud but the sound is reasonably clear. 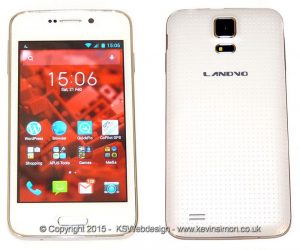 For the price of these type of Chinese phone you can’t really go wrong, though I would say don’t expect the build quality and feel of say a Samsung or HTC, but then again you are getting a smart phone for under £50 which is easily a third of the price of the basic range in the major manufacturers of android phones. Though do remember when buying these types of phones the warranty maybe a problem depending on where you brought it from. My self I’m happy with the phone so far but only time will tell. The phone does everything that I need it for and would be perfect for anyone wanting a cheap android phone say for kids. As these type of phones as what I would say I a throw away phone and your not to bothered if it get damaged as the price is what some people just pay for one month on a contract phone. So if you are looking for a cheap phone to do the basics and not bothered about the latest games, then why not have a look at these cheaper Chinese no brand phones, for about 20 to 30 more you can get ones with 5″ screens and slightly more ram and speed.

The reason I got a cheap phone is firstly I don’t use my phone that much, mainly only for calls both mobile and Skype for my landline business office number, emails, text and using as my satnav in the car. Now I have had for now over 5 years a HTC desire Z which to be honest it is now a lower spec phone that most people own at only single core 800mhz chip with 512mb ram. But this phone has done me well since my original android G1, as I liked a phone with a physical keyboard as I do a lot of typing on the go whether that is emails or notes for this site etc, and really not that keen on touch screen keyboards as I like a tactile feel when typing, but the phone was heavy and now wanted a lighter phone.

Another reason as with part of my jobs I work out side, my phone does get a bit knocked about, so why would I want to spend loads of money on a phone, that within a week would get scratched. I do always have a screen protector on the screen to stop the screen getting scratched. Now all modern phones are now getting bigger screens, I only want a small phone in my pocket, some people would say you get a better experience using a larger phone, now yes this is true but I have a great tablet for games, films, Web etc which I normally have I my work bag so if want that experience I always have my tablet to hand.

With having a camera on a phone is ok, but I’m not really bothered about the quality as if I want to take photos I will use my main bridge camera with full optical zoom, manual controls and a full size lens with a higher mega pixel sensor, though I needed a phone with a flash on just for the torch function as the other part of my job is sorting out cable and computers under a desk where a torch would come in useful and I always have my phone in my pocket.

So it the above you can seed why I went for a cheap phone, as to be honest if it even breaks within 6 months it’s paid for itself, as I have a sim only deal that is very cheap a month for what I need. Even though I work in the IT sector, it proves you don’t always need the best spec equipment if you only need the basics.

Here is the full specification of the Landvo L100