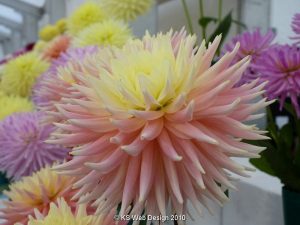 We visited the Shrewsbury Flower show on Saturday 14th August, this was the last day of the show, as also was on the Friday aswell. We decided to go for entrance after 4pm as was slightly cheaper, entrance was £12 after 4pm if before 4pm was £20 per adult (prices for Saturday, Friday prices slightly different), children are free with a accompanying paying adult.  We parked on the a temporary car park on the other-side of the river, the price for parking was £4.50.

There was loads of stalls selling all different types of things from garden furniture to beds etc. there was several marques some with crafts in and flower displays. We went to see the different displays of the flowers etc, and wasn’t disappointed at some where really amazing with so much colour and must have taken the competitors ages to create some of them. I was a bit disappointed that there where no outside garden design as not really into going to flower shows but went to the Tatton park flower show a few years ago and was really interesting to see the garden designs. But the inside displays were very good, so kind of made up for that. See some of my pictures for the displays, we did enjoy looking at the yogurt pot garden’s by school children.

The marques like I have said had different crafts in as well, in the one there was the bee keepers with two different displays of the bees, we had a very good chat with one of the bee keepers and this was very informative, Now im not keen on bees myself but glad they was in the little cabinets 🙂

There was also loads going on at different times in the main arena, not long after we had arrived there was the show jumping competitions, the weather at this point did spoil it a little as had a really heavy rain show, but only lasted about ten minutes, so wasn’t to bad.

While walking around the show there was a man dressed in a kilt,  he had a costume on that made him around 8ft + tall,  he had a man dress as a dog with him,  this was hilarious as the dog costume could even spray water like was having a wee, the dog kept chasing people around,  my daughter loved this and so did everyone,  as even i was in fits of laughter,  i even had the tall man stoke my head 🙂 i don’t know the name of the act but they was really brilliant and fun.

The parachutist’s were good aswell there was four of them jump from a small aircraft,  and they landed in the arena with great precision  It was amazing to see them come down to the ground so quick.

In the main arena at around 7pm there was a kids show on,  this was really great for the kids,  i cant remember the name of the act, The name of the act was dingle fingle , the act was two men one acting like a criminal stealing a car anfd the other trying to stop him,  the car had doors falling of aswell as smoke, if standing by the barrier to the arena you did get wet from them driving the car,  was really fun and enjoyable and had us in fit of laughter sometimes 🙂

The Household Cavalry Musical Ride was a great show, the horses and riders where amazing there rode in time with all different types of music. It was such a great sight to see, as we was sitting up the front we got a great view. This was the most amazing show I have seen., the horses were so controlled and very graceful. see the video above.

To end the evening at around 9:45pm there was a very amazing fireworks display, that lasted around 20 minutes, all the fireworks were timed to different types of music, this is one of the best fireworks displays I have seen in a while and must have cost of lot of money in fireworks, see the video below for a snapshot of the display.

I would definitely be going to the event next year, and we will probably be going for the full day as didn’t get to sewed all the flower displays and all the events going on, the only criticism with the day is that unless you purchased the event programs on the gate, you wasn’t to sure of t5he times of the events etc as they wasn’t fully published on the official website.

To see some of the photos of the day click the link below or the link to my photo albums above. Also click on the videos link in the post to see my youtube videos in HD 🙂