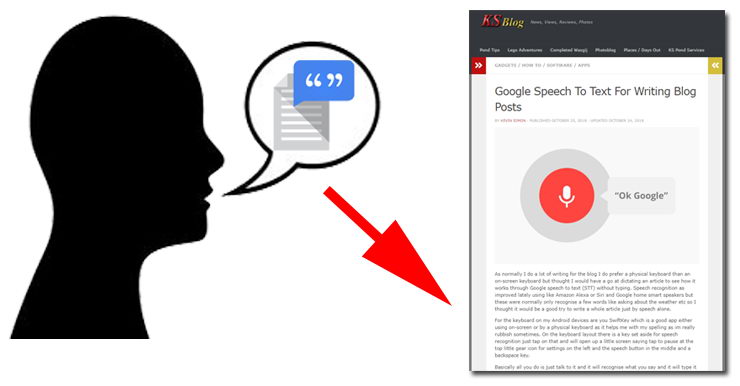 As normally I do a lot of writing for the blog I do prefer a physical keyboard than an on-screen keyboard but thought I would have a go at dictating an article to see how it works through Google speech to text (STT) without typing. Speech recognition as improved lately using like Amazon Alexa or Siri and Google home smart speakers but these were normally only recognise a few words like asking about the weather etc so I thought it would be a good try to write a whole article just by speech alone.

For the keyboard on my Android devices are you SwiftKey which is a good app either using on-screen or by a physical keyboard as it helps me with my spelling as im really rubbish sometimes. On the keyboard layout there is a key set aside for speech recognition just tap on that and will open up a little screen saying tap to pause at the top little gear icon for settings on the left and the speech button in the middle and a backspace key.

Basically all you do is just talk to it and it will recognise what you say and it will type it as you speak sometimes it shows the wrong letters or words but then seems to correct itself. If you do pause it does seem to stop and then you have to press the middle button again to continue.

I find it strange talking to the tablet to write it down instead of actually typing it do feel little bit Stupid. But at least there is no one around as I’m typing this or should I say saying it.

Trying to get to put in full stops and commas etc does seem to be a problem with it if you do say “full stop” It will put one in but only if you say it quickly, if you do pause then just puts the words instead of the actual character.

As you can see from the screenshot above which is as I spoke this there are a few mistakes these will be corrected before publishing and will let you know how many there was. It is ok for speaking to get im an article done but not sure if I would use it instead of a keyboard. But the moment I do have problems with my hands sometimes hurting when typying to do with a medical condition so it can help a little bit. I think the mistakes are more to do with me than Google speech to text as not really used to speaking and thinking what I want to say

I don’t know how much time I would save by speaking it instead of typing it even with my spelling mistake sometimes as I go through the whole thing again just to check it but normally do that before I publish anyway so I may try using this again for certain parts of blog post or just quick notes on the go to then edit later.

The mistakes that were made were not as bad as I actually thought only a few again mainly to do with the way that I spoke. Again the main problem what to do with adding punctuation etc. I think I use it and try and speak as natural as possible the better it will get.