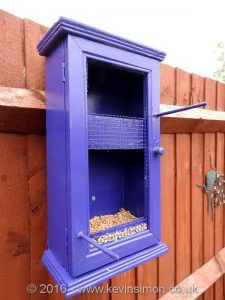 I’m a person that doesn’t like to throw things away, that’s if I can use them again or for something else. My mom had asked me to take some stuff to the tip and in with the rubbish there was this small cabinet, at only about 12″ in height,. The door had mesh in it. It was a bit tatty, but thought could do something with it.

We decided to make a bird feeder out of it. The first thing I did was to put a little shelf in it so that it could have two separate seed holders. I used some old hardboard that I had got cut down to shape and sanded down. Then using the same hardboard cut out two bits that would fit at the front so that there are two compartments to hold the bird seed. These were then nailed on.

Then with the door shut I cut away the mesh using wire snips to make two openings then filed down the sharp edges. Once this was done I got some dowel in and drilled two holes either side and then glued the Dowling in, so this make perches for the birds to stand on. I put a screw in the side level with the handle on the door so that could tie it shut using string or wire.

Once all this was done I had some blue spray paint left over from another project, so spayed the new bird feeder. I like the finished project as does remind me of the doctor who tardis. The feeder then was screwed into the fence. We have put some bird seed in but so far the birds haven’t had any out of the main feeder though have been having some of the seed that have been putting on the top of the unit.

So out of something that was to be thrown away and no cost at all as used spare wood and paint, have made something that looks nice in the garden and also hopefully help the birds out.