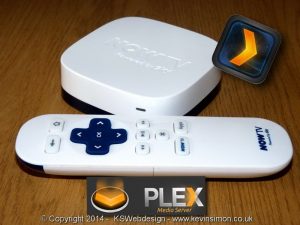 Sky produced a mandatory update earlier this year which removed the facility to sideload any app, this includes the plex app. After the update it also removed plex from the now tv box. So unfortunately the method below no longer works unless a hack comes out. I am now using android TV boxes that I can use plex on, to be honesty you have more functionality using these boxes and can pick quad core android tv boxes up for around £20 -£30. But also if you have a PS4 or XBOX one the plex apps works great on that as well. So now the information below is just for reference.

I decided to get a sky Nowtv box, though I wasn’t interested in using the sky services. I got it mainly as you can hack it to install plex which is a media streaming app, if you don’t know what plex is see HERE for more info, this is because they are a rebranded roku box. The original Now TV box was prices at only £9.99 (launched in 2013) for the box including remote, power supply, batteries for remote and even a reasonable length hdmi cable, this is even delivered free also these make cheap network media streamers.  This article was done using the original nowtv box though should work with the version 2 launched in 2015 (£15). so here is a quick howto guide to setup a nowtv box with the plex media client.

When you first install the Nowtv box, you need to sign up for a Nowtv account, now if you want to use any of the sky services sign up as usual with credit card etc so you can have the services each month if you wish. Though if only want to use as a media streamer using the plex app you don’t need to add your full details, when you go to sign up put in all your details on the first page ie username, password etc, you don’t even need to put your normal email address you can use any as sky do not send a verification email. When you get to the second page asking for credit card details don’t click on cancel or enter any details just close the page as you have already created your Nowtv account.

So once your Nowtv account is set up go through the normal setup of the box by setting up your wifi connection and entering your username and password, the box will then do any updates needed. You now have the now tv box up and running at this point if you have signed up for the free trial or paid for any of the sky services these are available to you. If you haven’t got the sky services you can still access the BBC Iplayer, 4od, demand 5, BBC and sky news, though at the moment of writing this article you don’t have itv player as these services do not require any further payment. You can also add any other channels from the roku store, these include though if you had an official roku box you would have access to a lot more apps and channels, and because plex is one of those channels that is omitted from the store you need to sideload the app.

To sideload plex you need to get the now tv into Developer Mode this is done by pressing Home x3, Up x2, Right, Left, Right, Left, Right, you have to press the buttons in quick succession so if you don’t get the developer menu up after pressing the buttons try again. You will then see a screen showing the ip network address of the Nowtv box, write this down you then have to enable the installer then you get a license agreement screen either scroll down or click OK, you are then asked to create a password for webserver which has to be a minimum of 4 characters,  the username is automatically assigned “rokudev”

Thats it for the now tv box, go to your computer and open up any web browser, and in the address bar type in the ip address of your nowtv box, you will then be asked for the username and password, put this you then see the development application installer (screenshot below), download any of the versions I have listed below, and the click choose file open your chosen version then click install, you can replace the version and at any time. And thats it after a few seconds you will have plex on your nowtv box. 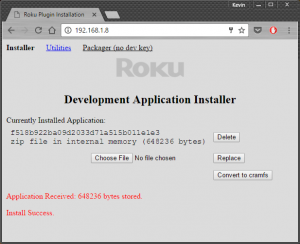 Since originally writing this article I have used different versions of unofficial builds of plex, all have worked fine for me, I am listing them all in case anyone has problems with a particular version, Though the one I have used the most is RARFLIX.

I found THIS version which is 2.6.9,  but then I found a copy of version 2.8.2, now I didn’t compile this version and can’t remember where I found it, but you can download from my downloads section HERE, but please remember I take no responsibility for this software, all I can say is this version is fully working on one of the now tv boxes I have got and the other is running the older version with no problems at all. So download either file do not unzip the file then within the screen on your pic browse to the zip file then click install, this will then send the file to the nowtv box and then auto install it. Once this is done your Nowtv will restart and you will now have access the plex channel on your Nowtv box. If you have not used or know about plex see HERE for full details on how to set up your system as a plex media streamer.

As the version above hadnt been updated for a while, I had found one called RARFLIX which can be downloaded from HERE for the latest version of RARFLIX, which is 3.2.6

Over the last 2 years have had no problems with rarflix, though it has not been updated since Aug 2014, so I have looked around for newer versions I did find this one called PLEX Classic, which was updated in April 2016, though the version number is 3.1.6 this one can be downloaded from HERE.

I have now been running the now tv box with plex for 3 years now with no problems at all, I have been able to stream all files with no problems this includes standard divx /avi files also 720p and 1080p mp4, x264, mkv files though remember that the now tv box only outputs at 720p. Depends on what is streaming if the box cannot decode the file its self then your pc running the plex media software transcodes this on the go. So given that these boxes just cost £10-£15 with no subscription these do make great media streamers, This replaced an aging 2.8 pentium pc that was running xbmc which was the xbmcubuntu version for streaming hd content to my main TV in the living room, I had even rewired one of the original xbox remote double so could use this remote on this pc. But now using the Nowtv box, even though don’t have some of the functionality of xbmc it is better as we now run plex on all different devices including our Android tablets and pc’s.

So if you are looking at a cheap multimedia network streamer box, it is worth having a look at one as long as you don’t mind kind of breaking the rules slightly, as remember you have to sideload the plex app that sky don’t allow you to have access to straight away, so you never know in the future sky may block you from doing this, but for only a Tenner and works fully at the moment is worth the risk. Also because you Don’t have direct access to the itv player or YouTube etc, you can add these through plex by adding the channels on your plex server and then while in plex on your nowtv you can get these direct, this ways isn’t perfect but does work great.

The one advantage I am finding using these nowtv’s with plex around the house is recording TV shows, as in the main PC I have has a TV tuner so can set recordings though windows media centre and play them through plex. We do have a youview box under our main TV for a pvr recorder but the problem is if you record something on this no way of getting the file off even though the huawei youview box does have USB can’t connect a external had drive to copy the files and can’t access anyway through local network. So are stuck with watching in only in one room, using plex combined with the cheap nowtv box works great anywhere around the house. So hope you found this howto guide useful and only takes around 10 minutes to set the box up as a fully fledged network media streamer box on the cheap.

Boxes for sale with plex installed

I had an enquiry from a reader about now TV boxes that are for sale on the likes of eBay etc,  saying they either have a lifetime or 12 month subscription to plex and allows you to access free movies and Sky channels  etc without paying an additional subscription.  We’ll looking into these they are a bit misleading.

First the plex services even the lifetime subscription (normally £120) doesn’t give you access to free media streams,  it is designed to allow you to stream media you have on your OWN pc.

What is being installed on these boxes which do seem to range in price from about £40 – £80. Is a plex app the same as the instructions above,  but instead of pointing to your own media they are being pointed to internet servers that are not associated with the official plex services or sky.  These servers contain illegal streams of sports, TV shows,  films etc.  So you may think you are getting an official services from Sky without paying a subscription,  but what you really are doing is illegally streaming services. Ie what Kodi could do with plugins.

On most of the descriptions for these they have something like “A lifetime subscription pre-activated to a dedicated server”  or  “All channels can go down for maintenance I do not control any of the channels”  which in reality means a dodgy server on the net,  that really could go down at any time.

Disclaimer : The instructions I am giving on this page is just the install the plex app on the now tv box for accessing your own media on your own computer. Not for accessing illegal iptv services, or how to do this.